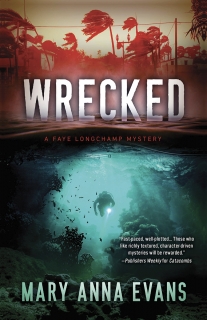 Next title in the Faye Longchamp Archaeological Mysteries. When tragedy strikes and everything she loves is threatened, Faye Longchamp, an expert in American archaeology, will resort to desperate measures. Because some losses cut to the bone…

The suspicious drowning death of Captain Edward Eubank breaks archaeologist Faye Longchamp’s heart. It also confuses her, because he was found in scuba gear and she’s never heard him even mention scuba diving. During their last conversation, he told her that he believed he’d found a storied shipwreck, but when Faye checks it out, she finds nothing there—not a plank, not a single gold coin, nothing. If there’s no treasure, then why is her friend dead? But the situation quickly escalates beyond a murder mystery. Surrounded by a community struggling in the aftermath of a major hurricane that has changed the very landscape, Faye grapples not only with the loss of her friend, but with her fears for her daughter, who is being romanced by a man who may be very dangerous.

As a professional with her own consulting firm, Faye had long ago given up her “anything goes” attitude when the law stood between her and an interesting dig. Now that recklessness is back. There’s nothing she won’t do to protect her daughter.

In this riveting addition to an archaeological mystery and thriller series perfect for fans of Nevada Barr, Faye must save her most precious cargo—her daughter.