Wrath of the Risen God by Tim Paulson 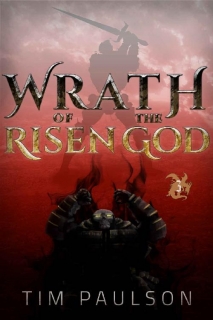 The kingdom has fallen…
…and from the ashes a new threat has arisen
Will all now face annihilation?

Giselle has been left behind, and she’s worried. She wants to find out what’s happened to her family and husband and believes she can handle the answers, no matter what they are. She’s wrong.

Aaron lives, after a fashion. Forced to serve a monster of a man, he’ll do anything he’s told, even kill, and he has. Will he find the strength to free himself from the tomb of stone or will despair consume him?
As the armies of Buckley’s newly formed republic march forth, power in the world will shift again. A great conflict is coming, one that will shake the foundations of the world, smash unbreakable walls, and leave the land soaked with blood.