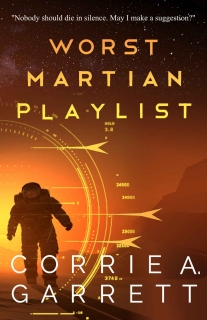 “No one should die in silence. May I make a suggestion?” A pair of shell-shocked astronauts struggle to survive in Worst Martian Playlist. The first caverns of the new Martian base, Tenacity, were dug by rovers and tested by the Forerunner crew. But when the first long-term crew is on its way, catastrophe strikes. Miranda Oceveda and Caleb Wexler are the sole survivors.

In the caverns and tunnels that comprise the new Tenacity base—still scheduled to have over a thousand residents by 2110—they do their work diligently. But they are plagued by their losses. When NASA uploads an AI assistant to the Tenacity system, they both welcome it. Sure, it’s a little pushy with its recommender engine (Ero was originally a proprietary personality for Amazon), but it’s handy, comes with tons of media, and supposedly has a good psychiatric function. But when Miranda begins to be reckless with her safety… When Caleb begins to lie about his tasks… They both have to grapple with what Ero has become to them. Because Mars is waiting to kill anyone who slips.