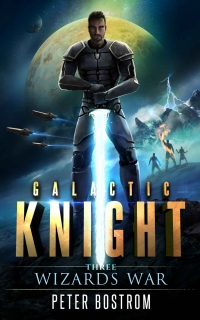 Sergeant Lucas Walker has lost everything – his reputation, his position in the military, and his only friends. Now he’s on his own, tracking down fugitives from his last battle against the Dominion. However, Walker’s hunt across the moons of Uranus is interrupted when he rescues an orphaned preteen with an uncanny ability to use the Dominion’s weapons. And to make matters worse, another interdimensional portal has opened and an elite Dominion strike force emerges. This time, they’re not equipped with claws, lasers swords, or fangs, but with…magic wands?

The United Federation of Sol is baffled by these new alien weapons and their only hope is to reinstate Walker–the military’s only expert in Old Earth lore. But can Walker convince his former teammates to join him–and his new pint-sized partner–for one more mission before these villains from a suspiciously familiar world of wizards can apparate an entire Dominion army? Or will his preteen protege spell the end of both Walker and our galaxy?