Within the Shadows by J.D MCG 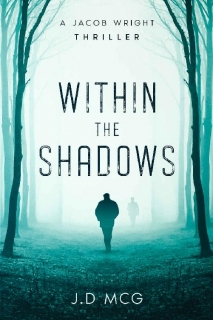 When Jacob discovers DCI Barnes is missing, the team begins to search for any clues into his disappearance. When Jacob and Ally check the cemetery, the last place anybody had seen him, they discover evidence of a suspected kidnapping. But Jacob has a suspicion about who is behind it all.

Jack Roberts was a running fanatic who enjoyed charity runs and marathons, until one cold night in December, when he jogged through the nearby woods and discovered somebody hiding within the bushes, watching him. A month later, Jack arrived home to find his wife’s body lying cold on the kitchen floor. His only thought was his stalker.

Mysterious envelopes containing photos appear on Jacob’s desk and at his home as he figures out somebody had been watching him and the team during their last investigation. Discovering his father had been keeping secrets about his family’s history from him, Jacob begins to spiral out of control. Secrets and lies are better kept in the shadows.