Wings of Mourning by Craig Andrews 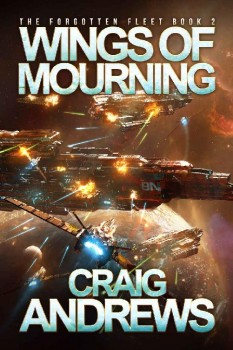 The enemy advances.
For six months The Forgotten have been humanity’s last line of defense against a terrifying alien invasion. Forced to train under impossible conditions, their success is marveled, their bravery unmatched. But they can only hold the enemy back for so long.
Callan “Coda” O’Neil has fought impossible odds to restore honor to his family name. But he’s exhausted and pushed to his limits. With his squadron’s numbers dwindling against the enemy’s continued onslaught, he fears he won’t be able to finish the job.

Commander Coleman, the leader of the experimental squadron, counts down the days until reinforcements arrive. Using his training curriculum, the Sol Fleet’s flight academies have been revamped to train new pilots and first wave of graduates will arrive soon.
But when the enemy mysteriously retreats to Baranyk space, surrendering hard fought systems, Fleet Command has questions. And concerns. Stationed aboard the advanced SAS Redemption, The Forgotten are ordered to investigate. Their discovery will shake the Sol Fleet to its very core.
And humanity isn’t prepared.