Why We Get Sick by Benjamin Bikman 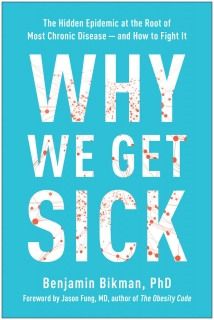 Why We Get Sick: The Hidden Epidemic at the Root of Most Chronic Disease—and How to Fight It by Benjamin Bikman
English | 2020 | Healthcare & Fitness | ePUB | 2 MB

A scientist reveals the groundbreaking evidence linking many major diseases, including cancer, diabetes, and Alzheimer’s disease, to a common root cause—insulin resistance—and shares an easy, effective plan to reverse and prevent it.

We are sick. Around the world, we struggle with diseases that were once considered rare. Cancer, heart disease, Alzheimer’s disease, and diabetes affect millions each year; many people are also struggling with hypertension, weight gain, fatty liver, dementia, low testosterone, menstrual irregularities and infertility, and more. We treat the symptoms, not realizing that all of these diseases and disorders have something in common.

Each of them is caused or made worse by a condition known as insulin resistance. And you might have it. Odds are you do—over half of all adults in the United States are insulin resistant, with most other countries either worse or not far behind.