Why Me… by W.L. Knightly 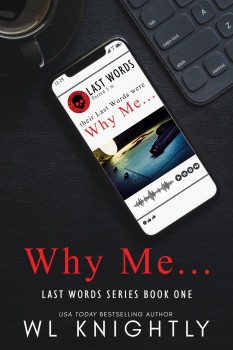 Two years after his fiancée went missing on a business trip to Hollywood, FBI Agent Ethan Charles is ready to move on with his life. But when an unexpected tip on a similar cold case comes his way, his curiosity gets the best of him.

While in Los Angeles searching for clues, evidence of another murder that’s connected to the missing girl comes to light and takes Ethan in a new direction with an unexpected ally.

Since dropping her dream to become an LA cop like her father, Sarah Green hopes to land that one big story that will solve all of her financial problems and get her editors off her back. When her sister shows her a viral video of a young girl being murdered, she’s not convinced it’s the one. But when it catches the interest of Agent Charles, who is willing to let her shadow him, she realizes helping him just might be the advantage she needs.