Who Killed Jane? by John Markowski 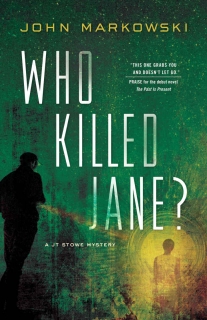 Be careful what you wish for. JT Stowe never intended to work a corporate job. Yet there he was staring at a computer screen and suffering through conference calls day after mind numbing day. His big aspirations faded as he trudged through countless status reports and mediocre performance reviews. His only escape: true crime podcasts. He consumed them with fervor, taking notes and doing his own research on the side. One evening, his wife offered up an idea: Start your own. And he did. JT’s hometown of Longview, NJ had one murder in its history.

The killing of a high school girl in 1971 that remain unsolved in the small suburban town. Her lifeless body was discovered in a ravine the morning after she had walked home from tennis practice. He based his podcast on that cold case. As he dove in and started asking questions, he soon learned that people in town still held secrets and that one man had been suspected of the murder but was never arrested.

That man was different, that man looked odd, and that man ultimately disappeared. As JT threw himself into the podcast, his work and home life suffered. What started as a passion project devolved into an obsession. Suspects emerged at every turn and they wanted nothing more than to shut JT down. They didn’t and JT solved the mystery. But with deadly consequences.