Who Dies Beneath by L.J. Hutton 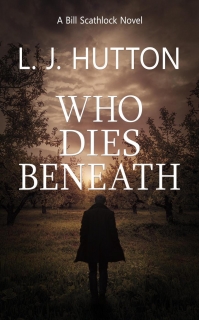 Who sits under an apple tree and dies for no apparent reason? The truth is stranger than Bill Scathlock could have believed.

When DI Bill Scathlock is temporarily seconded to Shropshire as emergency cover, it’s to deal with a strange sudden death, and if he hadn’t heard of another one just the same from his pathologist friend Carol, he probably wouldn’t have dug any deeper. But knowing of the previous body he starts looking for similarities, and when he finds four more cases, he’s worried he has a serial killer (or killers) on his hands. The only trouble is, the victims are so unlike one another it’s hard to find any connection – or it is until Bill starts digging into their pasts and finds that these men were all dangerous in one way or another.

Knowing that he can’t hope to take his concerns to his superiors, Bill starts investigating off-duty, but as other bodies turn up, he finds himself having to tread very carefully to not look suspicious himself. Yet it’s when he goes looking for the relatives of one of the victims that he stumbles upon the truth, and that is far beyond anything he could have dreamed of. Worse, this is nobody he could ever hope to arrest, so can he convince them to stop what they are doing, even if bizarrely they are morally in the right?

You don’t need to have read the other two, but they are referred back to. If you love a dash of magic with your mysteries, Phil Rickman’s Merrily Watkins and James Oswald’s Inspector McLean stories, or Ben Aranovich’s Rivers of London series, you’ll definitely want to read this.