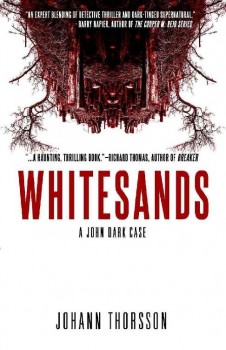 Detective John Dark’s daughter has been missing for two years. In his frantic and unfruitful search for her two years ago, J Dark overreached and was reprimanded and demoted.

Now suddenly back into the homicide department, Dark is put on a chilling case – a man who killed his wife in their locked house and then dressed the body up to resemble a deer, but claims to remember none of it. A few days later an impossibly similar case crops up connecting the suspects to a prep school and a thirty year old missing persons’ case.
Just as Dark is getting back into his old groove, a new lead in his daughter’s disappearance pops up and threatens to derail his career again.

Time is running out and John Dark needs to solve the case before more people are killed, and while there is still hope to find his daughter.
In the style of True Detective and Silence of the Lambs, WHITESANDS is a thrilling supernatural crime novel.