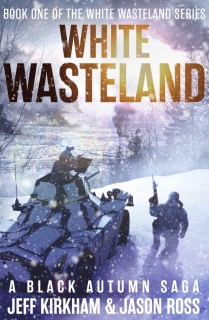 Black autumn was a horror show, but that was before the winter set in…

December descends on a broken nation, and the Homestead survival clan trembles beneath a tide of human suffering crashing at the gates of their tiny, mountain refuge. A fanatical warlord arises and drives the churches of the Rocky Mountains into a vicious civil war.

While threats surge around the Homestead, the Special Forces veterans and civilian fighters face a moral collapse at home, as the founder of the community struggles with personal demons, and a secretive group of women follow their hearts into uncharted waters.

Strange visions, precarious faith and troubled dreams gnaw at the Homestead’s survival. Is their salvation hiding in the dim corners of their nightmares?