Where Fear Lives by Lily Campbell 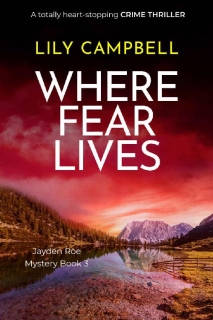 Caught between the FBI and the criminal underground, it’s his toughest mission yet…
Long since faded into legend, Jayden Roe works in the shadows to rebuild his friend’s lost honour. Jayden is unsure what to do with his life, or where he wants to go – and after years spent on the sidelines, he’s sure that his glory days are long-gone.

When a failed mission to stop a terrorist bombing left multiple school children dead, the FBI had no choice but to seek out the best of the best. But when the FBI appear with an offer he can’t refuse – minutes after shady old associates call in a last-minute debt, Jayden finds himself once again thrust into the secretive criminal underground.

Tasked with the seemingly impossible job of smoking out a cunning group of terrorist cells, Jayden must juggle his debt to the infamous Serpent Twins while keeping the Feds in the dark. He knows that if either group catches wind of his dealings with the other, his career – and life – will be on the line.
After his investigation leads him to an elusive traitor hidden within the agency’s ranks, he begins to unravel the terrible truth behind the terrorists. If he wants to avoid disaster, Jayden must act fast before the traitor can spring his carefully-crafted trap – but to do that, he’ll need to pull off his toughest case yet…