When the World Starts to Fray by Sam Parrish 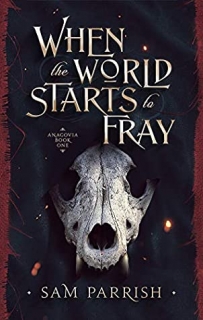 Forty years ago in the midst of war, an Anagovian soldier discovered the incredible ability to manipulate the very fabric of reality. Without thought of the consequences, man-kind used it to every advantage, winning the war and sending Anagovia into an age of peace and prosperity. Weavers grabbed hold of the Threads of reality and shaped them to their will. They are considered by most to be a blessing from the gods themselves. But a darkness is seeping in through the Fabric that none of them anticipated. Scores of men and women are going missing and beasts that normally keep to the dark corners of the world are moving in growing numbers.

Li’or is a mercenary. She takes any job that pays well and keeps her moving- no matter how dangerous. One night while she’s setting up camp, a young Weaver named Hashkan stumbles in and throws her careful plans off course. Before they realize it, they find themselves tangling with armies of monsters and madmen as they try to unravel the schemes of a tyrant. But will their small band of hired swords be enough to save Anagovia?