When It’s Time for Leaving by Ang Pompano 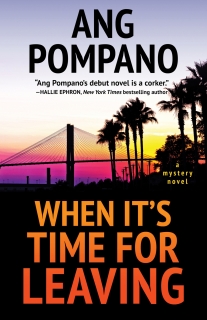 When his girlfriend dumps him and a drug dealer rams him on a bridge, Al DeSantis quits the New Haven Police Department. As he makes plans to head for LA, he learns his father, Big Al, is alive, has dementia, and is entering a nursing home. More surprising, he has deeded the Blue Palmetto Detective Agency in Savannah to him.

Al wants nothing to do with the man who abandoned him at eight years old, or his agency. But when his California condo goes bankrupt and he loses everything, he drives down to Georgia, intending to sell fast and head west. But then he discovers a dead body on the agency dock.

He delays leaving until he can solve the murder, but things get complicated. He finds that a strong, attractive female detective, Max, is his superior in the agency that he owns. Also, his father, now determined to help his “new partner” solve the crime, keeps escaping the home. The facility now wants Big Al out, and Al must become his father’s advocate. With his traditional values challenged, Al has a lot of adjusting to do.

When his father goes missing, Al and Max, team up to find him and capture the murderer. With Max by his side, he battles everything from PTSD to explosions to alligators. Old secrets stretch from the Savannah low country to the Okefenokee Swamp—all shedding light on the murder and Al’s relationship with his father.