When Elephants Fight by Ashwin Dave 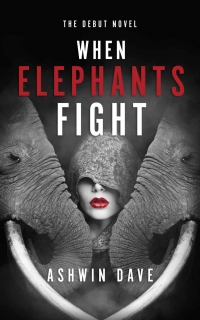 When British vet Alec Dunlop is stopped at customs on the way home from a trip to Africa, he’s unexpectedly thrown into a dangerous world of illegal ivory smuggling, blackmail and murder.

Drawn back to East Africa, Alec is soon working with wildlife cop Sam Samana trying to uncover a gang of ivory poachers – and falling in love with the beautiful Ava.

But when Ava is murdered, a heartbroken Alec is set on a fatal collision course with a crime cartel which has roots not only in East Africa, but in Dubai, Bombay, London and beyond. And when Sam comes up with a risky plan to set a trap for the crime lords, it could be Alec that’s in the firing line. As deadly secrets and hidden identities are uncovered, can Alec trust anyone at all? And will he make it out alive?