When Dealing with Wolves by A. R. Thompson 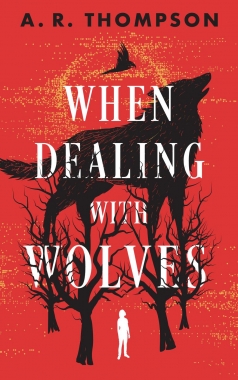 The Isle of Ys is wild and untamed, a place where forgotten gods slumber and hope is sparse. Humankind dwell at its southernmost tip in the town of Erdansten, ruled by fear of the world beyond their walls. The Wolvenkind roam the north, guarding the ancient forest of Deothwicc. All that prevents war between the kinds is the vast landscape that separates them, but with new dangers rising from old secrets, even that may no longer be enough.

Estene, mother of the Deothwicc pack, knows a reckoning is coming. She can also see what few want to believe: if either side wants peace, they must find a way to co-exist. Her youngest child, Grae, despises this notion. He craves revenge for the pain humans have caused him. And he’s willing to do whatever it takes.

As Dannaskeld of Erdansten, Rostfar is supposed to protect her people from magic; as a wyrdsaer, someone who is able to commune with magic, she is the very thing they fear. For years she has kept a delicate balance between her duty and her secret, but her daughter Arketh’s growing magical affinity has tipped the scales. Aethren is a trainee under Rostfar. They have spent their whole life striving to be strong enough to protect the town. But as wolves attack from outside and power struggles threaten the town from within, Aethren starts to wonder if Erdansten is worth it. At least if they walked away, they would no longer have to worry about the strange power growing inside them. Change is inevitable. And only the humans and wolves can decide if it will end in a better future – or annihilation.