What You Deserve by Alicia Lawson 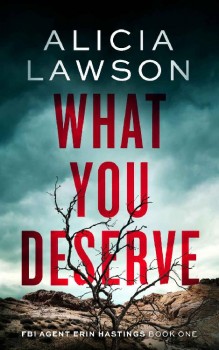 When lives are on the line, failure is not an option…
FBI Special Agent Erin Hastings is driven by the pain of her past. Fifteen years ago, she could’ve stopped her twin brother from killing his sixth victim. All she wants now is a second chance at catching a killer.
Riding high after a media blitz over her latest arrest, Erin is plunged back to reality with her first serial killer case—in Erin’s hometown. Reminders of her brother’s murders plague her nightmares. Haunted by the similarities between the two cases, Erin vows she won’t make the same rookie mistake again. This time, she’ll stop the murderer before he can claim any more innocent lives.

But the race to catch this ruthless killer grows more desperate as the body count rises. And with every suspect her team clears, Erin’s chances at redemption wither away. All while pressure for an arrest from higher-ups intensifies.
Erin won’t quit until she gets her man. Not when history seeks to repeat itself. With another victim’s life at stake, she’ll risk going rogue before she gives up.
But will she jeopardize her own life, rather than let this killer strike again?