What Waits for You by Joseph Schneider 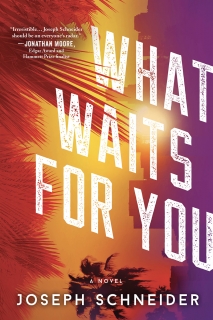 The nightmare descends on a Tuesday. An elderly couple’s home is transformed into a scene straight out of a horror film, their mutilated bodies the only clue left behind by the killer—and they are only the unlucky first in a series of impossible murders. Soon dubbed the Eastside Creeper, the murderer stalks Hollywood, camping out undetected in his victims’ homes until he’s ready to strike. After killing, he vanishes like smoke.

Considered an expert in the grotesque, Detective Tully Jarsdel lands this seemingly unsolvable case. Jarsdel, an academic-turned-cop, is intrigued by the Eastside Creeper. His methods are vicious, his path untraceable—nothing about this killer makes sense. But as the murders become more gruesome and the clues more inscrutable, widespread panic sets in. And amid the terror-induced chaos, Jarsdel’s unconventional methods may be the only thing left between a killer and a city about to descend into chaos.

What Waits For You is the story of a terrified community, the only cop in LA who might be able to put a stop to the hysteria, and a murderer with nothing left to lose.