What Goes Around by Ann Bloxwich 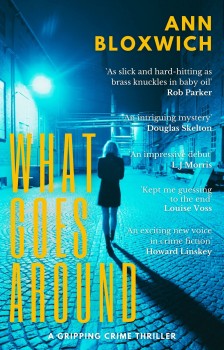 Vicky Wilson is dating Ray Diamond, legendary stripper and renowned bad boy. She goes backstage to see him during a show with friends and disappears.

When a woman’s body is found behind the club, DI Alex Peachey and his team are called in to find out who killed Vicky. But with his home life in turmoil, delving into the adult entertainment industry is the last thing he needs, especially with a case as complex as a spider’s web. But due to his colleague’s sudden illness he doesn’t have a choice.

Ray Diamond claims he’s being framed. His complete disregard for others means there are a lot of people who would love to see him fall from his pedestal. The question is, does anyone hate him enough to push him? And will DI Peachey be able to prove him culpable of murder before he strikes again?