What Dreams We Had by Phill Featherstone 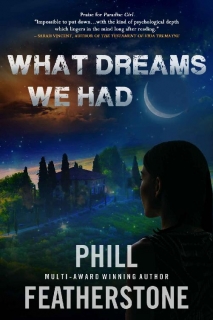 A band is invited to play at a celebrity wedding in Italy.
DJ, Alex, Elena, and Joey, the band members, are in a dead period between finishing their exams and getting the results that will determine their lives. It’s a time of anxiety and high hopes.
The event is to be held at a villa in Tuscany. All expenses will be paid and they’ll be housed in luxury. It sounds too good to be true.

Alex sees himself as the group leader but the others don’t always accept that. He’s from a privileged background but his parents are distant and severe, and although the others think he’s rich, his options are limited.
DJ is from a middle-class background. Alex is a long-time buddy, but when the book opens they are not getting on. DJ is drifting in Alex’s wake. For a long time, he hung out with Elena, before she started dating Alex. He still fancies her.

Joey is the baby of the group. He’s not only the youngest, he’s the least confident, the least academic, and the quietest. He’s keen on Mia, but she’s DJ’s girlfriend. Joey is from a single-parent family. His dad walked out on them.
Elena is the final member of the band. She’s the singer. She also writes the words for the band’s songs. She’s determined and confident, and won’t put up with nonsense.

Mia is the odd one out because she’s not in the band. She’s athletic and a championship gymnast. She wants to be a dancer.
What happens in Tuscany will make them wonder whether anything they thought was real, actually is.