We Don’t Speak About Mollie by Vicky Jones, Claire Hackney 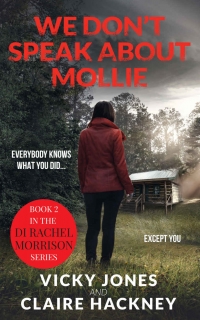 What do you do when you can’t remember something your hometown can’t forget?
The Killer in Kynance Cove mystery has been solved, but haunted by the aftermath, DI Rachel Morrison is in need of a change of scene. After accepting a secondment from Cornwall to a brand new Task Force in Liverpool, she gets stuck in immediately clearing the Missing Person’s cases that have been cluttering up the Reactive Crime Unit’s archives. One day, a new, mysterious case is brought to her attention by Katie Spencer, a distraught young woman with a harrowing childhood secret.
Twenty-seven-year-old Katie and her sister Jenny were seperated twenty years ago by a father who couldn’t cope raising both of them after their mother died. Katie and Jenny now live at opposite ends of the country – and the distance between them is more than geographical.

At their aunt’s funeral, Katie and Jenny are reunited, albeit briefly. But why is Jenny so cold towards her? And why won’t she allow Katie to spend any time with Charlotte, Jenny’s five-year-old daughter? And just who exactly is Mollie?

Mystified by her past, Katie drives up to Liverpool from her home in Brighton to seek answers from Jenny, but a familiar face tells her a story that completely destroys Katie’s world and throws into question everything she thought she knew.
Together with DI Morrison, Katie pieces together the fragments of her memory. But is knowing the truth a blessing or a curse?