We Are Bound by Stars by Kesia Lupo 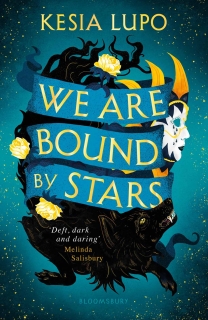 The next adventure in Kesia Lupo’s stunning and original YA fantasy world. Perfect for fans of Leigh Bardugo and Laini Taylor.

On a mysterious island where the very earth holds magic, masked assassins plague the city and strange creatures rise from the desert. Livio has riled against his destiny his whole life. Beatrice longs to escape her life of servitude. But when a twist of fate unites them, it is up to them to stop a deadly revolution.

Are they just puppets in someone else’s game? Will they have to accept the hands they have been dealt or can either change their fortunes?

Another thrilling, plot-driven adventure, with an even bigger twist, We Are Bound by Stars is a tale of masks, politics, desire and deception that will have you gripped once again in Kesia Lupo’s rich fantasy world.