Waves of Deception by Brian Grogan 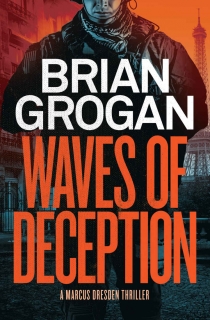 An ex-Navy SEAL. An invisible enemy. A slew of targeted attacks around the world, leaving security contractors dead. Retired SEAL Marcus Dresden knows what it means to lose something. He’s tucked himself away in a secluded beach town to play it safe—to forget his failed marriage, his two estranged children, and a botched SOF mission that still haunts him.

But soon, fellow security contractors start dying. When the tragedy hits close to home, Dresden has no choice but to put aside his fear and trepidation, assemble a team, and uncover the truth. As Dresden leads his team deeper into a dark ocean of deceit, they become ensnared in a madman’s plot to infiltrate the world’s elite.

Can Dresden outmaneuver and outwit this dangerous and depraved adversary? Does he still have the grit to put those he cares about in harm’s way for the greater good, to follow the maddening trail of crumbs to the bitter end? Can he succeed and redeem himself, no matter the cost?