Warn Me When It’s Time by Cheryl A. Head 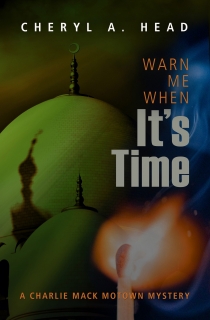 A hate group operating in Oakland County, Michigan has claimed responsibility for a six-month-long string of arson fires and robberies at mosques, temples, and black churches around Detroit, eluding police and federal agencies. The most recent fire, at a mosque in Dearborn, kills a respected imam. His children—suspicious are of law enforcement’s treatment of Muslims, and afraid of reprisal—hires Charlie Mack and her team of investigators to find their father’s murderers. The Mack team begins to hunt down the clues in this local hate crime, but they aren’t prepared when they realize that those clues are pointing to a widespread conspiracy that runs through elected state officials and up to the highest levels of national leadership.

FBI agent, James Saleh, returns to help the Mack Agency infiltrate and take down a homegrown militia hell-bent on starting a race war in America.