War of the Maps by Paul McAuley 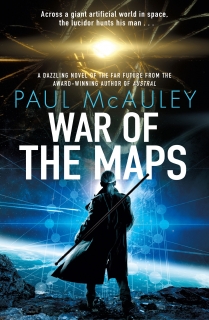 On a giant artificial world surrounding an artificial sun, one man – a lucidor, a keeper of the peace, a policeman – is on the hunt. His target was responsible for an atrocity, but is too valuable to the government to be truly punished. Instead he has been sent to the frontlines of the war, to use his unique talents on the enemy. So the lucidor has ignored orders, deserted from his job, left his home and thrown his life away, in order to finally claim justice.
Separated by massive seas, the various maps dotted on the surface of this world rarely contact each other. But something has begun to infiltrate the edges of the lucidor’s map, something that genetically alters animals and plants and turns them into killers.

Only the lucidor knows the depths to which his quarry will sink in order to survive, only the lucidor can capture him. The way is long and dangerous. The lucidor’s government has set hunters after him. He has no friends, no resources, no plan.

But he does have a mission.