War of Earth by September Thomas 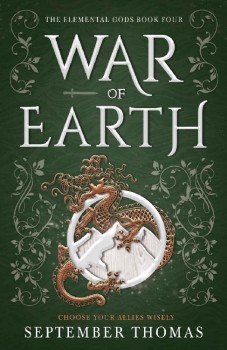 Seventeen-year-old reincarnated God of Water Zara Ramone finally understands who she is and what she stands for, but will she have the fortitude to overcome her greatest challenge yet?
Global nuclear negotiations have disintegrated. World leaders are rushing back to their countries, scrambling for cover as they prepare for bombs to fly. With humanity on the brink of destruction, Zara returns to Order Headquarters with the other elemental Gods to find a way to prevent the impending apocalypse.

She may be used to battling her way out of impossible situations, but Zara soon finds herself engulfed in an unfamiliar realm of political warfare. When her friends turn against her and long-buried secrets are unearthed, Zara finds unlikely aid at the hands of an enemy.

As Zara, her friends, and her fellow Gods throw themselves in a desperate race against time to prevent catastrophe, she can only hope she’s made the right choices and put her trust in the right people.
And there are other players lurking in the background, players who’ve counted the years, waiting for the right moment to rise up and seize power they believe to be theirs.
Players who are finally ready to strike.