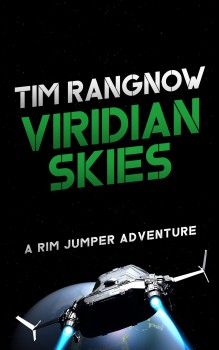 A journey into the depths of madness.

After several months of training his new apprentice, Kole Anwynn is talked into visiting the Viridia system. A rare celestial event will bring three days of near darkness to the inhabited portions of the main planet, and Neela is eager to attend the festival filled with music, food, and fun that will celebrate the stunning eclipse.

In order to convince him, Neela lines up a quick job they can handle before the festival starts. An archaeologist eager to explore Ancient ruins on the planet is looking for escorts. Kole meets the woman, and decides to take on the job that will cover most of the exorbitant costs associated with attending the Viridian Skies festival.

Kole soon learns that an old rival is escorting a competing party toward the ruins, led by one of the few people to enter them and come out alive. The tales of such survivors speak of madness and insanity, and Kole is desperate to keep himself and Neela far away from whatever might cause it. Under the green light of the shimmering auroras that fill the sky during the three day eclipse, Kole and Neela face their greatest test.

Not everyone who begins this journey will survive.