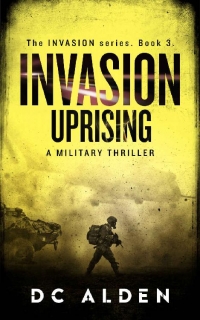 Three years long years of tyranny, oppression and bloodshed have passed since the invasion of Europe. Now a new dawn rises…
A nuclear attack shatters the fragile peace between Beijing and Baghdad. In Europe, caliphate forces are driven back across a war-torn Ireland and into the sea.
As the tide turns and hope rises, hard decisions are about to be made…

Britain’s most senior judge, a ruthless tyrant and zealous caliphate disciple, is determined to crush the seeds of rebellion with her own brutal form of justice.
A British resistance operative, secretly embedded with the country’s cruel elites, is forced to put his own life at risk as the walls close in around him.
Far to the north, the King’s Continental Army is preparing for all-out war. Within its ranks, four friends stand ready to assault the deadliest frontier imaginable, one that stands between them and the liberation of their homeland.
And when the uprising begins, the mayhem that follows might cost them all their lives.