Up For Grabs by Max Hennessy, John Harris 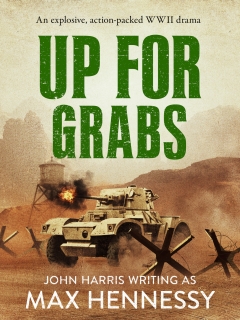 A fighting team with a very special difference…
In times gone by, the looting didn’t start until the foe was vanquished! But in North Africa nobody bothered to hang around for the enemy to retreat.

With half of Egypt waiting open-armed for anything going, people stole whatever wasn’t screwed down – and flogged it on the Cairo black market. The British… The Italians… and Rommel’s Afrika Corps: they all used each other’s captured weapons, stores, vehicles – even their uniforms.

This is the enthralling story of an unlikely group of fighting men – the Desert Ratbags – a concert party stranded behind enemy lines. Their very special skills, from pilfering to stage performing, help them not only to survive, but also to see a little action for themselves.
An enthralling, suspenseful tale of WWII, perfect for fans of Alistair MacLean, David Black and Jack Higgins.