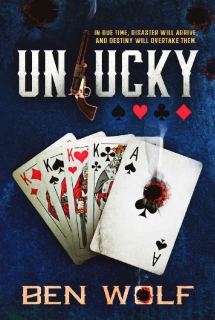 Dalton is dying.
But he’s the only one who can
save his people from their reckoning.
When Dalton Phillips arrives in the boomtown of Spider’s Rock, it doesn’t take him long to find trouble. Four showdowns later, he’s become one of the most feared gunfighters in the Arizona Territory.

As his notoriety grows, Dalton must navigate the wild world of the old west and all of its trappings, including vicious bandits, working girls, power-hungry landowners, dangerous Apaches, and even a bit of true love.

All the while, Dalton’s tuberculosis continues to worsen. It’s killing him more every day, and there’s no cure.
Knowing his time is short, Dalton makes a series of choices that lead him down a dark, desperate road—a road that can only end with his death.
But when Spider’s Rock is confronted by a new and terrible threat that will lead to the deaths of everyone Dalton knows and loves, he has to make a choice: will he continue living for himself, or will he wager his life to save the town?