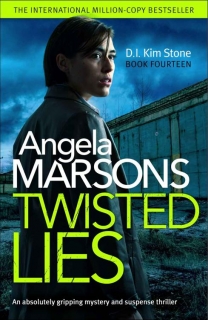 Her stomach lurches as she sits in the windowless room. He throws her phone to the ground, grinds it against the floor with the heel of his shoe and brings his face closer to hers.

There was no turning back now, her life as she knew it was gone. When the lifeless body of a man is found on an industrial estate, Detective Kim Stone arrives on the scene and discovers he’s been tortured in the worst way imaginable. But as she breaks the devastating news to the victim’s wife, Diane Phipps, Kim can’t help feeling that something isn’t quite right about the woman’s reaction. Twenty-four hours later, the victim’s family disappears into thin air.

Then a second body is found staked to the ground in a local nature reserve. Desperate to crack the case open quickly, Kim and her team unravel a vital clue – a fiercely guarded secret that links both victims and could cost even more lives. A secret that some police officers are also protecting.

Faced with deceit from those she should be able to trust, family members who won’t talk, and local reporter, Tracy Frost, opening a can of worms on the case of a woman murdered by her husband a year ago – Kim is in deep water like never before. Kim must find the motive if she is to find the killer who is systematically targeting and torturing his victims. But can she unlock the shocking truth and stop him before he strikes again?