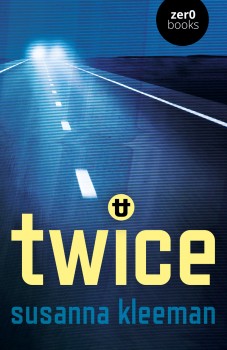 TWICE is a speculative thriller about false fronts and coercive control on a global and personal scale.

It tells the story of Nim, who discovers that her childhood games taught her dangerous secrets she must now keep from her first love – and his doubles. Nim’s ex-love returns from Silicon Valley, wanting a book from their childhood. She chucks him out. Moments later, he’s back again, one fingertip missing, claiming he’s the real Chris and that Nim’s first visitor was an imposter. Nim doesn’t believe him, so he abducts her, forcing her on a journey where nothing is as it seems.