Turn Me Back! by Victoria Kelly 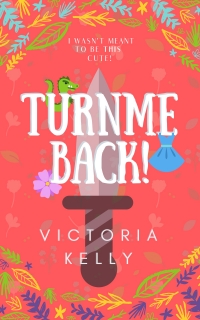 Regaining your youth isn’t all it’s cracked up to be.

At 23 years old, expert mercenary Willa Lang isn’t exactly old to begin with, so she’s less than thrilled when an ‘undeserved’ curse turns her back into a younger version of herself. A much younger version – she now looks like a six-year-old. It’s hard enough getting mercenary work when you’re fully grown. As a child, it’s practically impossible to make anyone take you seriously. Worse still, you can’t even reach high enough to stab the nay-sayers in the heart. Willa needs to turn herself back to normal, and quickly. But the woman who cursed her is being a complete witch, insisting that Willa show herself to be kind, generous and unselfish before she’ll lift the curse.

Kind generous and unselfish… Go on a quest and help a few people. It can’t be that hard, right?