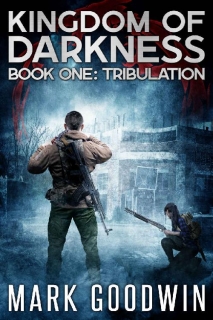 Accused of domestic terrorism, Emilio Vega was on his way to a Department of Global Security death camp when the mega-quake hit. The streets beneath his transport vehicle buckled, tossing the van in the air like a toy. He survived the crash, but the world is now in ruins. However, for a condemned man, this disaster may be just the lucky break he needed.
Emilio has been left behind!

Six detainees were in the van prior to the quake. However, only Emilio and one other prisoner were still around when he regained consciousness. Emilio searched the surrounding area, but to no avail. The missing prisoners believed in an event called the rapture, when Jesus would collect His saints before raining down unbearable wrath on the planet’s remaining inhabitants.

Can Emilio and Mackenzie survive the gauntlet of destruction known as the Great Tribulation?
Mackenzie Thompson, the other prisoner still present, is convinced that it was the rapture and that they’ve been left behind. She also believes a time of unparalleled torment is about to be poured out upon the earth. Emilio and Mackenzie have a place to go, but it is hundreds of miles away. The roads are unusable, and the two of them are fugitives on the run. If this truly is the Great Tribulation, it’s off to a bad start.