Trial Under Fire by Zoë Sharp 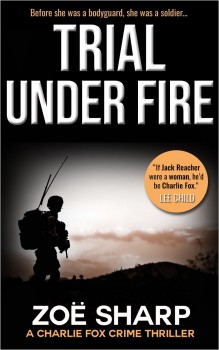 Charlie Fox is one of the toughest cookies you could ever hope to meet. Word of advice, though—don’t try to get her to talk about her time in the military. Let’s just say it didn’t end well.

Before her fall from grace, Charlie was considered a rising star. She made it through one of the toughest challenges any soldier would have to face—Selection for Special Forces. The nightmare that came next is a story I’ve explored in scenes and flashbacks throughout the series.

But what happened before that? Back when Charlie was a young soldier in the regular army, on patrol in Afghanistan, being kept away from the front line fighting as stipulated by the regulations concerning female personnel. What did she do back then to prove her worth as a specialised soldier, under life-and-death conditions? How did she earn her chance?

That is a story I’ve never told. Until now.