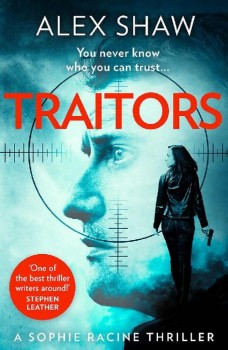 A TRAITOR WHO CAN’T BE CAUGHT
French Intelligence officer Sophie Racine is tasked with travelling into the heart of a warzone in Ukraine. Her mission is to assassinate a Russian spy who took the French secret service apart piece by piece and gave their secrets to the Kremlin.

A PRISONER WHO CAN’T BE KILLED
Ex-SAS trooper and MI6 Officer Aidan Snow is also in Ukraine. Sent by British Intelligence, he must extract an innocent citizen caught up in the conflict in rebel-controlled Donetsk.

A WAR THAT CAN’T BE WON
When their missions collide, Snow and Racine find themselves outgunned and outnumbered. Even if they make it out of the warzone alive, danger won’t be far behind…

Perfect for fans of Killing Eve, Chris Ryan, James Deegan and Vince Flynn, this is an explosive action thriller you won’t be able to put down.