Tragedy on the Branch Line by Edward Marston 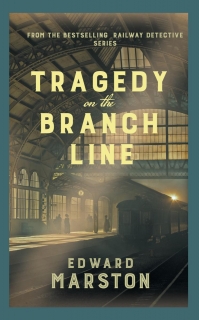 When Robert Pomeroy, a young undergraduate at Corpus Christi College, finds a letter slipped under his door in the early hours of a rainy day, he flies into a panic. Hastily readying himself and dashing off a few lines for the porter to summon his friend Nicholas Thorpe, he hurries to the railway station. But he doesn’t reach his destination alive.

Inspector Colbeck and Sergeant Leeming are called upon to investigate this tragedy on the railway. It soon becomes apparent that Cambridge’s hopes of success in the forthcoming Boat Race rested on Pomeroy’s shoulders. With academic disputes, romantic interests and a sporting rivalry with Oxford in play, the Railway Detective will have his work cut out to disentangle the threads of Pomeroy’s life in order to answer the truth of his death.