Touching the Sun by Len Maynard 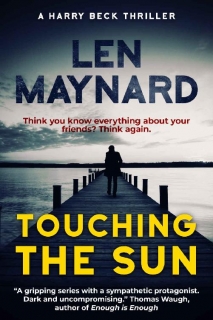 Harry Beck leads a carefree life in the Bahamas. The owner of a small charter company, Beck enjoys a lifestyle with few responsibilities and fewer commitments.
Beck’s peaceful existence is shattered when his best friend’s wife and small daughter are brutally killed in an explosion, and his friend, Alan Lancaster, goes missing.
On the same day, Beck’s home is ransacked and Stevie Bailey, the girl who crews for him on The Lady of Pain, his boat, is tortured and left for dead.

Beck comes to realize that the people responsible for torturing Stevie are the same as those who planted the bomb in Alan Lancaster’s car that killed Lancaster’s wife and child.

Beck receives a message he believes to be from Alan, which leads to the discovery of a computer flash drive. Contained on the drive is the damning evidence of a paedophile ring; a cartel of rich and influential people who are a using the Bahamas as a gateway through which to traffic children from Haiti and Cuba.
As Beck is drawn into this nightmare, he discovers that the foundations of his world are built on nothing but sand, forever shifting. Relationships that he once depended on are shown to be mere illusions, and no one can be trusted.
At the climax of a deadly game of cat and mouse, played out across the picturesque, and sometimes deadly, Bahamian landscape, Beck has to decide who he can trust and who will ultimately betray him.