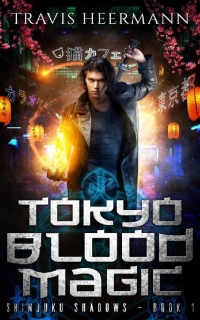 He’s never failed a witch hunt before. Until he must hunt the only woman he’s ever loved…
When Django Wong, a modern-day ninja turned sorcerer, takes a job to track down a newly Awakened witch, he discovers that his target is not only his lost love, but now she’s an enforcer for the Black Lotus Clan, a ruthless yakuza syndicate.

But time can change a person. Is she the girl who used to love him, a yakuza slave, or a deadly black witch?
With a smart-mouthed magical house cat as his ally, Django must protect her from other Hunter-Seekers sent to kill her until he can learn the truth of her allegiance. And not only that, if he can’t stop her from stealing a powerful magical relic, the Black Lotus Clan will launch a bloodbath in Shinjuku’s streets.