To Hunt A Magpie by Jack Gatland 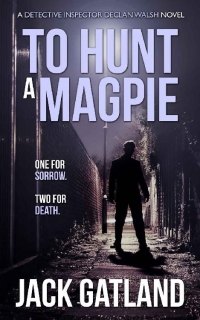 One for sorrow… Two for death.
Thirty years ago a group of five child detectives; Tommy, Luke, Tess, Jane and Daniel, along with their dog, Dexter made the national press with their crime solving. Nicknamed the Magpies, their adventures were written up as novels by author Reginald Troughton and released to children around the world, including a ten-year old Declan Walsh.

But now, someone is targeting the Magpies, with Reginald brutally murdered while writing a last, ‘lost’ adventure. And DI Declan Walsh and the team of the Last Chance Saloon must not only solve Reginald’s murder with the ‘help’ of these rusty amateurs, but at the same time save the surviving members of the Magpies from a devious and determined killer with a chilling connection.

But while they do this, the team will also delve into a decades old conspiracy – one that suggests that the Magpies were created as a Government PR stunt gone wrong, and that there were more Magpies, missing ones, dying in tragic circumstances but never acknowledged…