Time to Fear by Michael Anderle 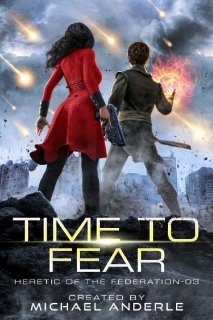 One human is willing to sacrifice hundreds in his desire to force the Dreth to start a war.
A war the Dreth will deliver with vengeance.
The rumor of the Witch coming back is not enough. Will Admiral Jaleck make the hard decisions?
Back on Earth, John is swept up into events that will bring fire down from the heavens.
Or his death.

Will John, Ivy, Remy, and Amaratne survive the coming challenges, or will the Regime CIO nail their rebel bodies to the wall?
Or will he worry about John so much after he destroys the Dreth and has bigger fish to fry?
Not if Stephanie has anything to add to the discussion.