Till We Become Monsters by Amanda Headlee 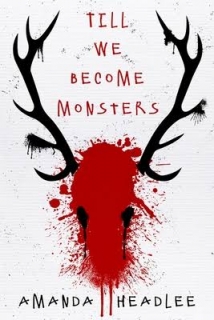 Monsters exist and Korin Perrin knew this as truth because his grandmother told him so. Korin, raised in the shadow of his older brother Davis, is an imaginative child who believes his brother is a monster.

After the death of their grandmother, seven-year-old Korin, blaming Davis for her demise, tries to kill him. Sixteen years following the attempt on Davis’ life, racked with guilt, Korin comes to terms with the fact that Davis may not be the one who is the monster after all.

Past wrongs needing to be righted, Korin agrees to a hunting trip with his brother and father. But they, along with two friends, never make it to their destination. An accident along the way separates the hunters in the dark forests of Minnesota during the threat of an oncoming blizzard. As the stranded hunters search for each other and safety, an ancient evil wakes.