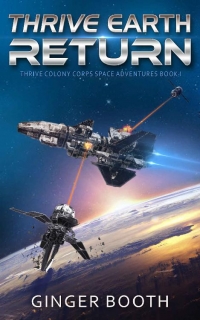 They thought Earth was dead.
Captain Sass Collier can’t die. A century ago, the Colony Corps carried her to the stars in the exodus called the Diaspora. Because Earth was doomed.

Still she longs to see home again. She hopes the terraforming tricks and miracle cures of the colonies can heal the one best planet for humanity. She expects to find isolated pockets of survivors, desperate for help.
She arrives with her motley crew from the boonies to face not one, but three surviving worlds — Earth, Luna, and Mars.

And Sass’s homecoming starts off with a bang.
The Northern League tyrannizes Earth now. They catch Sass and her ship to hold hostage against each other.
Can Sass save her crew from their most powerful foe yet — the mother world?