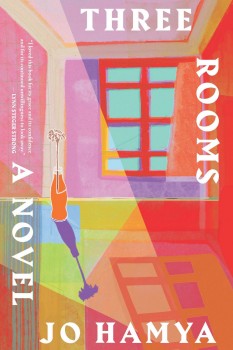 A piercing howl of a novel about one young woman’s endless quest for an apartment of her own and the aspirations and challenges faced by the Millennial generation as it finds its footing in the world, from a shockingly talented debut author.

“A woman must have money and a room of one’s own.” So said Virginia Woolf in her classic A Room of One’s Own, but in this scrupulously observed, gorgeously wrought debut novel, Jo Hamya pushes that adage powerfully into the twenty-first century, to a generation of people living in rented rooms. What a woman needs now is an apartment of her own, the ultimate mark of financial stability, unattainable for many.

Set in one year, Three Rooms follows a young woman as she moves from a rented room at Oxford, where she’s working as a research assistant; to a stranger’s sofa, all she can afford as a copyediting temp at a society magazine; to her childhood home, where she’s been forced to return, jobless, even a room of her own out of reach. As politics shift to nationalism, the streets fill with protestors, and news drip-feeds into her phone, she struggles to live a meaningful life on her own terms, unsure if she’ll ever be able to afford to do so.