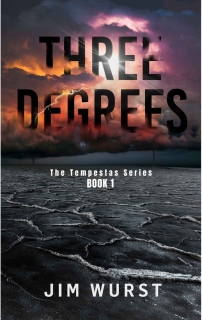 In 2052, an election year in the United States. In a presidential race already fraught with charges of intrigue, matters are further complicated by a mysterious network of hackers and by news of an ominous device being built in the Chinese interior.

Senator George Cranston of the Federalist Party is an underdog presidential candidate struggling against the entrenched corruption by the ruling Doctrinist Party. His running mate, Dr. Lilly McDowell, began life as a Chinese orphan, led a firebrand life as a young activist, and is now finding herself in a world for which she is not prepared.

A world where climate change has become a reality, with devastating consequences for all of society. The struggle for order continues amid melting glaciers and ice caps, rising sea levels, deforestation, loss of species, massive dislocation of people, the spread of disease, and social and economic chaos.

On a space station, a young pilot faces the eternal challenge of an ordinary person thrown into extraordinary events. On the Galapagos Islands, a scientist from the now-extinct country of Fiji has taken the island chain to his heart, even in the face of an approaching killer typhoon and near-certain death. A small team in Borneo, led by Lilly McDowell’s daughter, struggles to save orangutans from the violence of nature and humans. An agronomist in Nigeria finds himself leading a doomed humanitarian mission. And on the home-front, families in Minneapolis and Albuquerque are coping with the daily, now routine, hardships of violent weather and shortages of life’s basics. Who will survive?