Those Who Watch From Afar by Zack Hacker 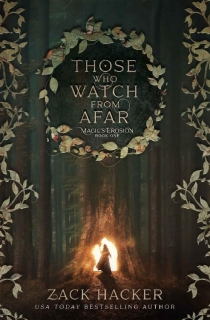 A forgotten magical power lying dormant in the shadows. Human civilization on the brink of destruction. A young elf looking to find her place in the world.
The future of magic falls into Petra’s hands when she first sets out to explore the world, only to discover a prophecy that foretells of her role in a great revolution. She’s keen to seize her calling, until she discovers that it requires her to face off against her own mother.

When she succumbs to her curiosity and enters the human world, Petra feels rebellious. However, after falling in love with one of those humans and choosing to enter the fight, she learns what being a rebel really means.

Those Who Watch From Afar is the first book in the Magic’s Erosion series by international bestselling author Zack Hacker. If you like epic journeys that span centuries and characters struggling to find their place in an ever-shifting landscape, you won’t want to miss this coming of age fantasy series. There’s always a rebellion brewing in the chaos just below the surface—it’s all about which side you choose.