This Eden by Ed O’Loughlin 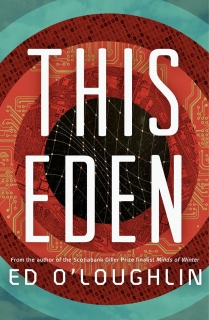 Michael Atarian is out of his depth. The closest he ever came to working in tech was when he rode a delivery bike for a food app in Vancouver. Yet when his coder girlfriend dies, he is inexplicably headhunted by a sinister tech mogul and transplanted to Silicon Valley.

There, a reluctant spy named Aoife lures him into the hands of an enigmatic war-gamer who tricks them both into joining his quest to save the world. Hunted by government agents and corporate goons, and manipulated at every turn, Aoife and Michael find themselves in an intercontinental chase that takes them from California to New York, from the forests of Uganda to Jerusalem, Gaza, Alexandria, and Paris, and to a final showdown with the truth in Dublin.