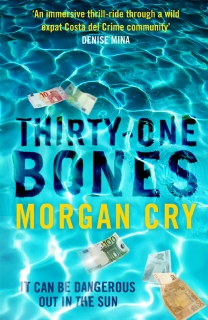 When Effie Coulston drops dead on the floor of her bar in a small Spanish town mid-business meeting, her daughter Daniella feels it’s her duty to return for the funeral. But Daniella has been estranged from her mother for over twenty years, and Effie’s life in Spain harbours many secrets . Daniella is soon confronted by a hostile group of ex-pat misfits who frequent the bar and who, along with Effie, are involved in a multi-million-pound property scam. But the money has vanished, and the ex-pats are threatening to implicate Daniella to save themselves.

Meanwhile, a Spanish detective is investigating Effie’s death. He’s convinced Daniella knows more than she is telling. And now a terrifying enforcer has heard about the missing cash. With no idea where the money is and threats coming from all sides, Daniella is up against a seemingly impossible deadline to find the cash. She’s a stranger in a strange town – and she’s seriously out of her depth.