Thirst for Sin by Kennedy Layne 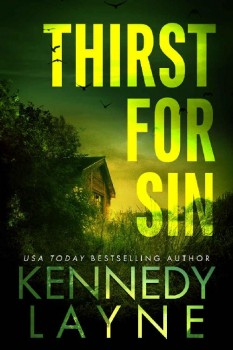 Brooklyn Sloane works as a special consultant to the FBI as one of the most adept profilers in the agency’s history. She had been recruited at a relatively young age from her career in academics, but her colleagues have no idea the disturbing motive for her success.

While her current investigation into a cold-blooded serial killer garners the attention of the media, Brook is able to discover the unsub’s first kill. When a tragic shooting takes place involving one of the agents assigned to the case, Brook finds herself unexpectedly out in the field searching for evidence that will eventually lead her to a viable suspect.

As Brook moves closer to her target, her own troubling past is breathing its familiar breath down the back of her neck until she finds herself at a crossroad with the very transgression that shaped her moral fiber. As her past and present collide, which one will rid her of the sin that stains her soul?